BlondeFish
April 7 in Brick & Mortar Casino Talk
AcidJoe, Irunit4times, PocketsTwos, SteveKerr & other members on Facebook already know about this, but for those who haven't heard, the best-value poker opportunity - since Casino Rama's Las Vegas overlay I posted about before - has opened up this year.

TLDR: PM me if you want to join June J, Giancarlo S, Pat L, Bill K & others in a FR** poker vacation at Pearl River Resort, Mississippi on May ~5-16 for at least 10 F*E* days playing some poker.


While June Jenkins, Greg & I were playing at WSOP Aruba, we were alerted to the F**E poker vacation offer & the 3 of us did get all the FR** room, F*E* dinners, & F**E unlimited alcoholic & other drinks! We were told not to post publicly the word "F***" as regular casino guests had complained why they didn't get the same great deal that us poker players got. We didn't have to spend a single cent, except of course for the +EV tournament buy-ins, the juicy cash games with only $5 max rake & $1.25 reward/hour, optional tips, & going out of the reservation.

I became stranded in the USA due to the 72-hour PCR test requirement & the huge backlog in COVID-ravaged USA, so I decided to continue playing poker at WSOP Tunica, WSOP Florida & WSOP Cherokee. Pearl River repeated the same FR** offer for March, so at least eight members of Canada Poker Community took advantage of this last month, including Angie from the WPT bar leagues, John P from the London & local casinos, June & me.

The same *REE offer is available for their next poker series on May 5-16, with six members so far having booked a f*** room. They want you to stay for at least ten days & play the poker tournaments &/or cash games. I plan to fly to WSOP Senegal by May 15/16, so I will have to drive home early instead of staying until the end.

A total of five C.P.C. members made a final table in March, so they all qualify to return to the Player of the Year tournament in March 2023. One member won an event, trophy & extra prizes from a sponsor. Another won $4,200 in bonus prizes for bagging three times in Event #1, along with cashing in Day 2, & there was no tax withholding! I cashed a total of four times, including fourth place in the Celebrity Bounty Event with WSOP Main Event champion Greg Raymer; I have also cashed in five straight poker series this year.

The main decision you have to make is if you can make it for >= 10 F*** days at Pearl River Resort in Mississippi between May 4-17. Some flew to Jackson or Atlanta airport & took a taxi or rented a car; others drove in their Tesla or other car (I drove my own autonomous car) from the Toronto area. The casino does not publicize any of this, but you can see lots of posts, March/January schedule, photos & other details on my Facebook page & the Canada Poker Community group. 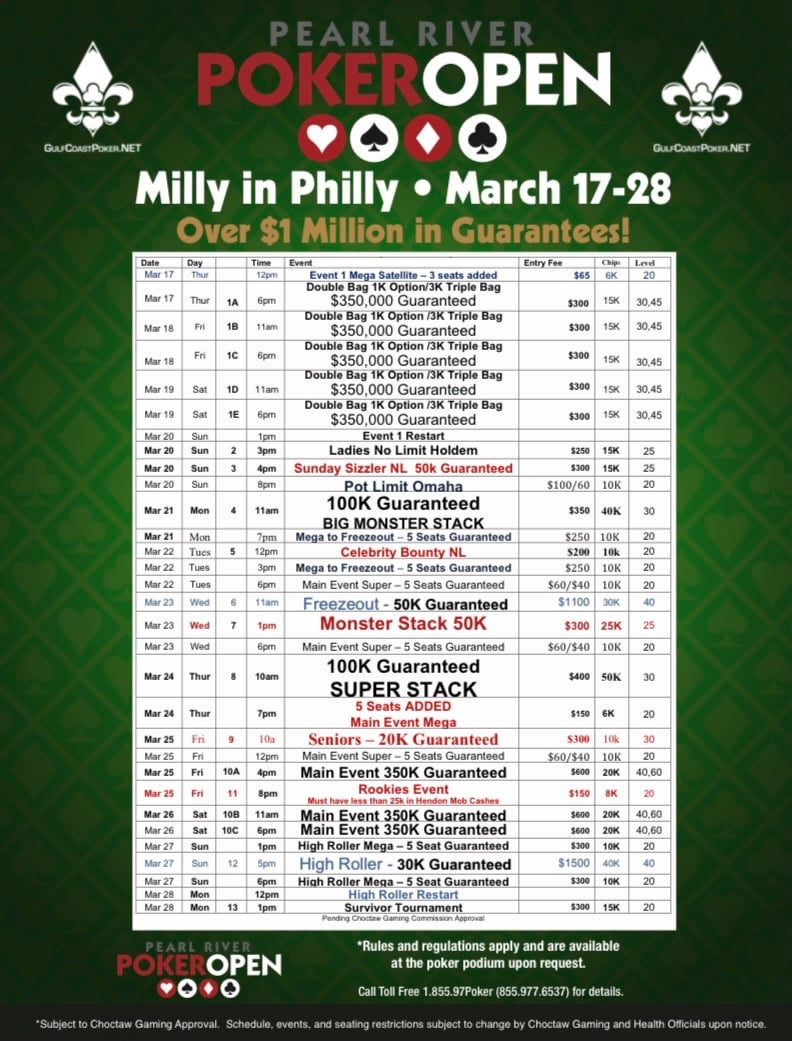